We had bundled up for the March for Our Lives in Saint Paul and marched along with an estimated ten thousand other folks, mainly young people, to the capitol building to demand action to end gun violence.   After the rally, still warmly dressed, we decided to run down to Hastings and see if the snow trilliums were venturing out of the ground. Never mind that the wind as we had crossed the bridge over the Mississippi was bitingly cold. Never mind that snow buried much of the still-frozen ground. We were hungry for the first wild flowers of the season. And so we went searching for a sign that spring had begun.

The north facing, forested slope where in previous years we’ve found snow trilliums, one of the first spring ephemerals, was still ankle deep in crunchy snow. All we found in a few bare spots around the trunks of trees were last year’s hepatica leaves lingering, waiting for this year’s blooms before putting out new leaves. Of snow trilliums, which can bloom even in the snow, not a glimpse. Under that snow they waited for warming.

But snow trilliums, we’ve learned in our wildflower searching, might not be the first Minnesota native wildflowers of spring. Skunk cabbage, it turns out, is in even more of a hurry. The plant makes its own internal heat with starch from its roots. Its maroon-colored spathe (a modified leaf) is shaped like a bird’s large, sharp beak, and the flowers, which have no real petals, open inside the protection of that spathe. Skunk cabbage, along with other woodland wildflowers, grows in the marshy ground along Minnehaha Creek, so on Sunday we head for the boardwalk beside the swiftly running water. Snow has melted from stretches of ground beside the boardwalk, and here we spot our first skunk cabbage breaking through the dark earth. And then another, and another, and another. One flower even grows in the center of a melted circle of snow, proof of what we’ve read about skunk cabbage’s internal heat melting the snow cover so the plant can emerge.

Never mind that the spring equinox has come and gone and snow is predicted for tomorrow. Never mind that we haven’t yet seen a robin returning. Here, alongside Minnehaha creek, skunk cabbage is a sure sign that spring has arrived and the season of searching for Minnesota’s native wildflowers has officially begun. 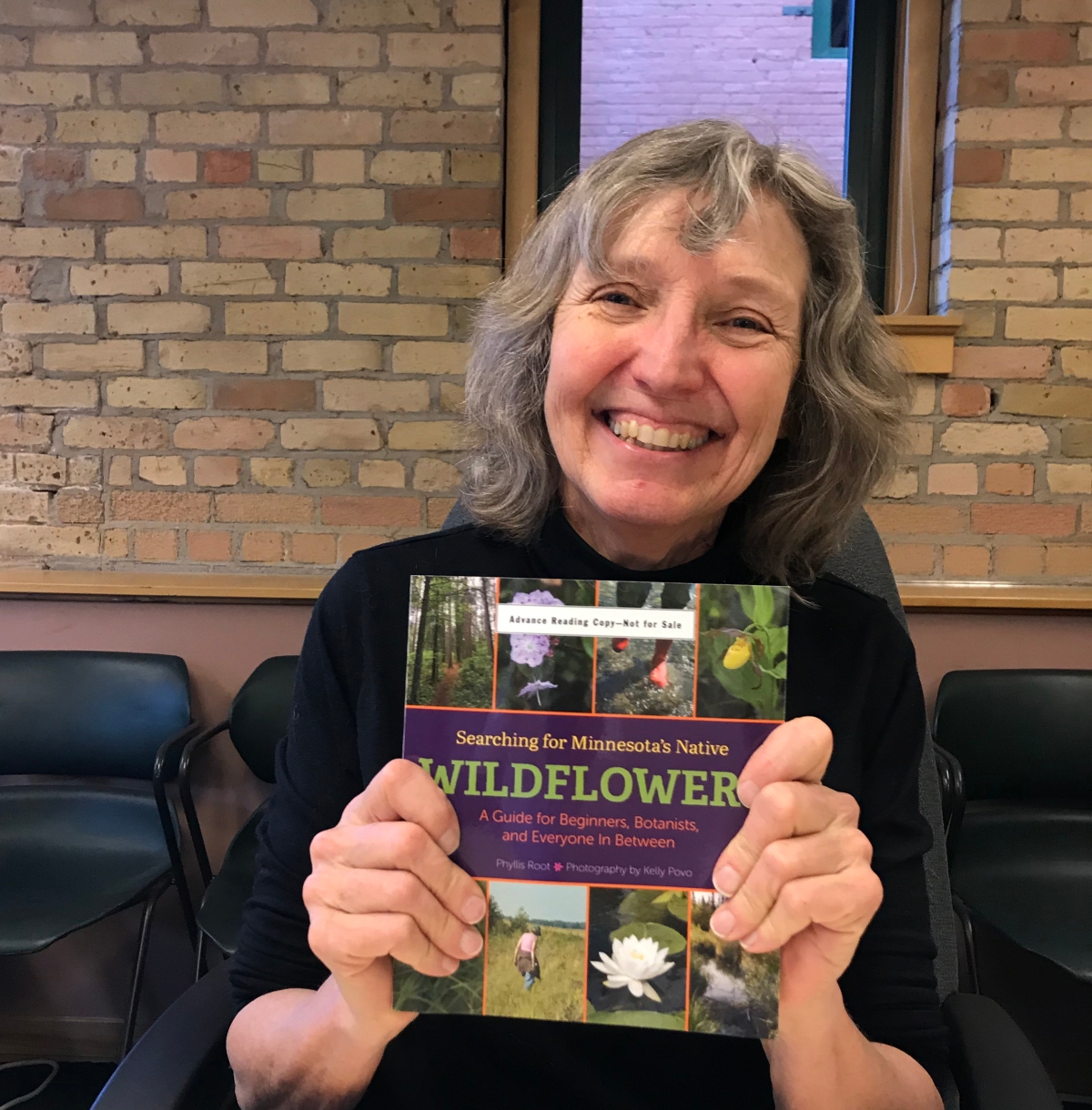 Wildflower searching often involves a lot of waiting. We wait for the snow to melt and the snow trilliums to appear. We wait for the pasque flowers to bloom, the kittentails to sprout up, the western prairie fringed orchids to make their appearance, and the four kind of gentians to appear later in the summer. We wait for pitcher plant flowers to open like pinwheels and for rose pogonia to blossom above the peat moss. We wait, we hope, we look, and sometimes we find.

Now we are waiting again for spring, but we are waiting, too, for our book Searching for Minnesota’s Native Wildflowers: A Guide for Beginners, Botanists, and Everyone In Between to be published at the beginning of May. Like a long-buried seed, this book has been germinating for years as we took road trips and hiked through prairies and bogs and forests and along lakeshores to see some of Minnesota’s native wildflower treasures–and looked, too, closer to home. We started with a yearning to know these flowers, a guidebook or two, a roadmap, a camera, and a field notebook. Along the way we learned more than we ever imagined about when native flowers bloom, where they bloom, what they might bloom with, and why they matter. We’ve waded creeks, lost boots in mud, and gotten lost ourselves more times than we can remember. Impatiently hopeful, we’ve driven north only to find the woods still buried in snow. Now, with snow outside our windows, we wait for spring and a new season of wildflower searching.

And we wait, too, to see our book bloom.

A beautifully illustrated, family-friendly guide to Minnesota’s native wildflowers and how to find them.

Phyllis Root and Kelly Povo chronicle the ten years they spent exploring Minnesota’s woods, prairies, hillsides, lakes, and bogs for wildflowers, taking pictures and notes, gathering clues, mapping the way for fellow flower hunters. Featuring helpful tips, exquisite photographs, and the story of their own search as your guide, the authors place the waiting wonder of Minnesota’s wildflowers within easy reach. Published by University of Minnesota Press, May 2018.

Check out the book!