Each summer for the last few years I’ve been lucky enough to go sailing with friends in Lake Superior. This year my friend Mary and I joined Mark, the sailboat-owning friend, at Rossport, Ontario, to sail on Lake Superior.  Wind, sun, sailing, hiking, rock hunting, swimming, wildflower searching, even a sauna—what better way to spend the days of summer?

On the way north to meet Mark, Mary and I stopped in Grand Marais where common butterwort’s yellow leaves crept over the rocks and tiny-flowered Hudson Bay eyebright bloomed. Both are arctic relicts or disjuncts, those plants that, thanks to the cold, wet, harsh climate of Superior’s shore, grow far from their main habitats farther north.

As we sailed we stopped to explore and hike among the scattered islands, where many of the flowers growing in woods and on rocks were familiar faces from Minnesota searches. It makes sense: flowers don’t stop at borders or even have to show their passports, and the forests and bedrock that make up Minnesota’s north shore don’t stop there, either.  We saw bunchberries, a few blooming but most already gone to red-berry seed; starflowers gone to seed; Canada mayflowers done blooming; the remnants of a lady’s-slipper orchid; bluebead lily with its blue beads of seed; one-flowered pyrola; wild sarsaparilla; Indian pipe; Labrador tea; alpine bistort; and blueberries (alas, not quite ripe yet but growing in abundance).

At CPR harbor we took a three-pitch hike with fixed ropes to the top of a bluff and passed at least fifty lesser rattlesnake plantain orchids blooming in the green, green moss. On a rocky projection in Woodbine Harbor we found three-toothed cinquefoil, shrubby cinquefoil, upland goldenrod, harebell, some new kind of saxifrage, and a beautiful purple vetch-like plant abuzz with bumblebees.  At Battle Island, our last stop before returning to Rossport, we came across black crowberry, Hudson Bay eyebright, and, on a rocky cliff slick with rain, encrusted saxifrage with its silvery-edged rosette of leaves—all arctic relicts.

I came for the sailing and the friendship (and the beaches rich with Lake Superior rocks), and I also found familiar flowering friends and new ones among the islands’ woods and rocky shores. 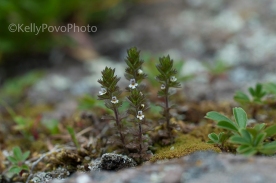 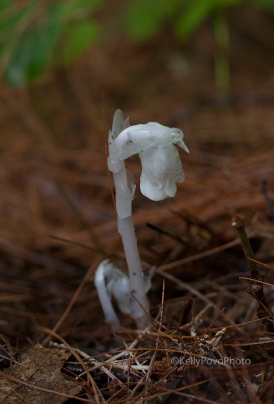