The trees are beginning to burn with color, mornings are cooler, the days shorter, the air crisper.  Even though prairies no longer burst with summer flowers, fall, too is fine prairie time. So on a day of cloud-streaked blue sky we head off to Oronoco Prairie Scientific and Natural Area (SNA) to see what we can find.

And down in the grasses a blue surprise: downy gentian and stiff gentian, both in bright and beautiful bloom.

Goldenrods, some gone to seed and some still in flower, offer us a chance to identify two more species—Great Plains goldenrod (euthamia gymnospermoides) and tall goldenrod (solidago altissima)—in our search to learn all eighteen of Minnesota’s goldenrods.

Most other flowers have gone to seed, but even the seeds fascinate. Whorled milkweed pods not yet open point upward like candles.  Butterflyweed pods release their silky strands, shimmeringly white in the sun. Rattlesnake master (a species of special concern in Minnesota at the northern edge of its range and one of six rare plants to grow here) shows its spiky brown seed heads, and the dark reddish-brown seed capsules of Great St. Johnswort open like dry petals.

Wandering along paths with the scent of mowed grass underfoot, we investigate a hill prairie we haven’t climbed before and find cylindric blazing star and rough blazing star gone to fuzzy, fluffy seed. A plant with bright orange round fruit turns out to be late horse gentian, although it belongs to a different genus than the blue gentians we are seeing.

It’s a splendid day to be out exploring this dry bedrock bluff prairie.  As we walk back toward the car we are already planning an earlier trip next year to catch some of these flowers in full bloom.  But for now we’re content with flowers gone to seed, goldenrods, gentians, grasses, and a wide prairie sky.

Even before reaching the top of the hills at Yellow Bank Hills Scientific and Natural Area (SNA) at the far western edge of the state we are blasted by wind.  Wind bends the yellowing grasses into waves and tosses the field sagewort into a crazy dance party.  Wind frosts whitecaps on the lake on the western edge of the SNA. Dry grasses crunch underfoot, but the sound is almost drowned by the wind.

It’s a gorgeous day to be out on the prairie.

We’ve come here to try to track down velvety goldenrod (solidago mollis), a state special concern flower, listed as growing at this SNA in a small population at the very eastern edge of its range.  This fall we’ve been on the hunt for all of Minnesota’s eighteen goldenrods, which for years we’ve just clumped together as “Yep, that’s a solidago.” Now we’re determined to sort them out in all their golden glory, and what better time of year than September? We’ve already identified roughly half of the goldenrods, and a stop at Cedar Rock SNA on our way west has netted us Riddell’s goldenrod (solidago riddelli) with its long, narrow, beautifully arching leaves, past its prime but still clearly a Riddell’s. We’ve been to Yellow Bank Hills before in search of velvety goldenrod with no luck; this time we plan to search every bit of the SNA’s 78 acres or get swept away by the wind, whichever comes first.

Hills roll across the southern part of the SNA. Here and there a glacial erratic rock glitters beneath a covering of grey-green lichen. Flowers are mostly gone to seed, with a few purple and white asters still blooming along with the bright yellow of an occasional hairy false goldenaster.  Goldenrods are scattered around the southern end of the SNA, but none of them fits the clues for which we’re searching. We have plenty of clues: velvety goldenrod is short (6”-24”), is said to have has ovoid or blunt grey-green leaves, has usually lost its basal leaves by bloom time, and has dense hairs on its leaves and stem which have a velvety feel. Now all we need is a goldenrod that has read the same guidebooks we have.

Having scoured the southern end, we wander into the northern end, where seemingly endless goldenrods, many past prime, grow in the lower, moister areas.  Gauging height can be a challenge, since we frequently have to lift a wind-flattened goldenrod to see how tall it is.   We lift. We peer for blunt or ovoid grey-green stem leaves. We feel for velvety surfaces. All the while the wind whips our hair, pausing now and then as if to inhale, then blasting away again.  Wind is an integral part of prairie, but this feels like more wind than we’ve ever encountered before while flower chasing.

After what seem like thousands and thousands of goldenrod perusals, we are almost on our way back to the car when we come upon a small population of goldenrods that looks just a little different from all the ones we’ve seen so far.  These plants are short, have grey-green leaves (although the tips look more pointed than blunt), and have softly hairy stems. Could this possibly be velvety goldenrod?

We have recently fallen in love (or at least serious like) with a cell phone app that gives its best guess at plants about which we are uncertain.  The app is sometimes right, sometimes not, sometimes so vague as to be unhelpful, but this time it confirms that we are looking at velvety goldenrod.  We’re still not completely convinced, but I take notes and GPS coordinates so we can return to this spot next year when the flowers are in full bloom. Kelly takes photographs.

A windy and sunny prairie is hard for photography, but I hold tightly to the sun diffuser screen (so it–and I– don’t blow away) and shade the plant while Kelly waits to click pictures when the wind to pauses.  Then, hopeful that we might have added another goldenrod to our growing list of ones we recognize, we head for the car and the long drive home.

Flowerchasing season is short, goldenrod season even shorter.  If we don’t find all eighteen goldenrods this year, there’s always next year, but finding what we think is velvety goldenrod makes us hopeful that we might, someday, find them all. 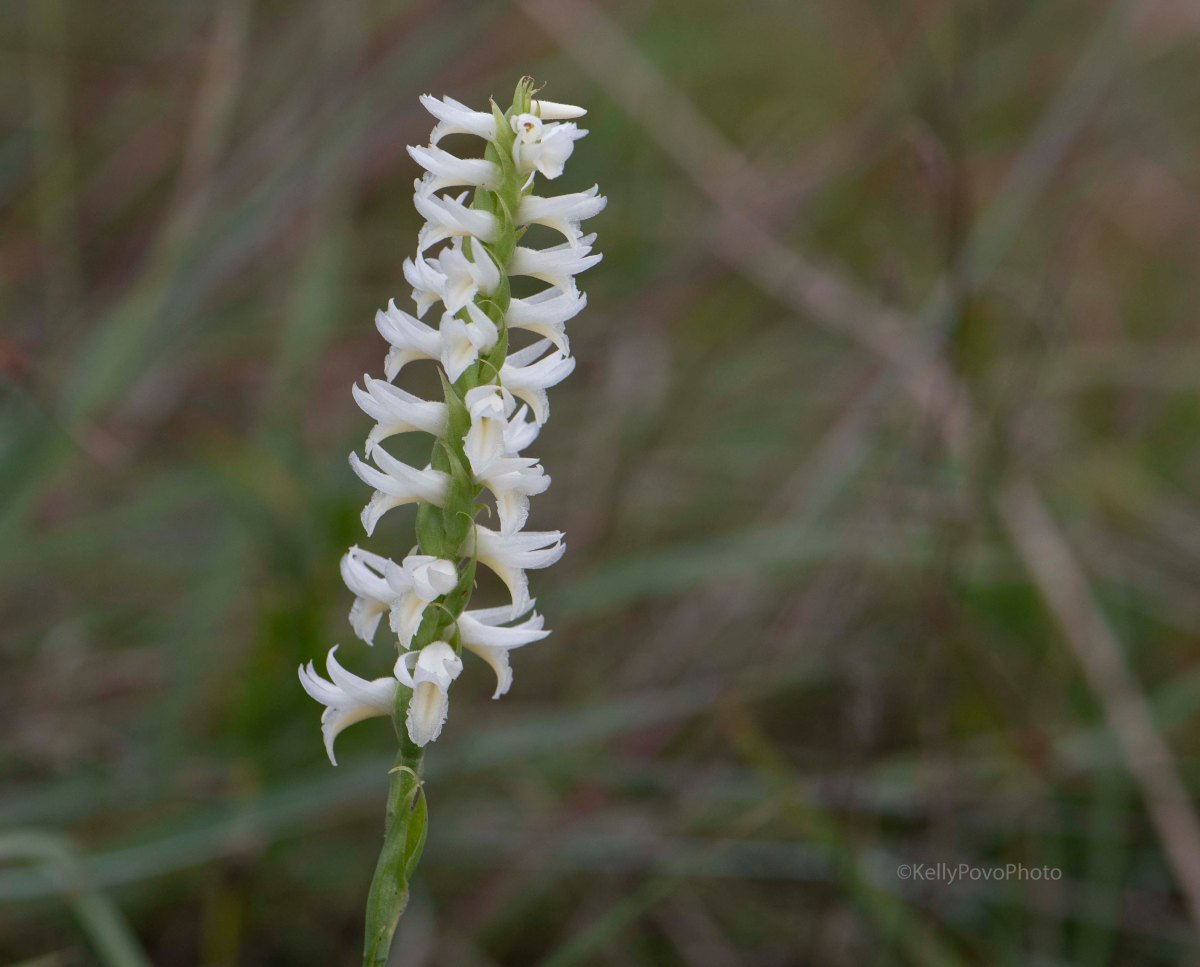 The entrance into the park passed through prairie colored yellow with goldenrod and purple and white with asters.  We’ve been trying to learn all the goldenrods in the state (Minnesota Wildflowers lists 18 of them), and we’d gotten up to four we were pretty sure we could recognize and one more we were absolutely sure of– upland white goldenrod, the only white goldenrod in the state.) We stopped along the prairie drive and figured out another:  the bright plumes of showy goldenrod.

And on those showy goldenrods a surprise –hundreds of monarch butterflies, orange and black wings dark against the golden flowers.  We ventured into the prairie a bit, careful not to disturb the feeding monarchs, and discovered another surprise, a multitude of cream gentian still blooming. Many flowers were beginning to brown, but some were still a pale yellow, their blossoms like little bunched bouquets. Already the day was a delight.  What would the goat prairie hold?

The path to the goat prairie led through woods, where we identified another goldenrod, elm-leaved goldenrod whose shape makes us think of fountains or fireworks.  Reddish-brown berries of Solomon’s seal and vivid red clusters of Jack-in-the-pulpit seeds brightened the forest floor, and ghost pipe gleamed palely under white pines. The goat prairie, when we came to it on one side of the path, was true to its name:  a hillside that fell away so steeply you needed to be as sure-footed as a goat to traverse it. Here, too, goldenrod and aster bloomed, and monarchs flitted among them.

We kept to the path, which ended in a stunning overlook of the Mississippi river and surrounding bluffs. There, in the short prairie grasses next to the path, we found Great Plains ladies’-tresses, freshly opened flowers curving in bright white spires. When I knelt down to smell one, the flowers really did smell sweetly of almonds.

Whenever we’re out flower chasing, it’s hard to quit after just one place, and since one of our favorite SNAs, Mound Prairie, wasn’t far away, we decided to check it out.  Mound Prairie SNA is made up of three goat prairies rising above the surrounding countryside, and here, too, we discovered Great Plains ladies’-tresses in bloom along with asters, goldenrod, and a few last brightly yellow partridge pea flowers.

Not much farther down the highway Magelssen Park towers above Rushford, so we decided to  stop there, too, to see if we could find cliff goldenrod among the rocks.  No cliff goldenrod to be seen (that we could identify, anyway), but even more Great Plains ladies’-tresses welcomed us in the brown and yellow grasses of a remnant goat prairie.

With plenty of daylight left, and with Pin Oak Prairie SNA almost on our way home, why not make one last stop to see what else might be blooming or gone to glorious seed? The reason why not became evident as soon as we turned down the road toward Pin Oak Prairie SNA and discovered that the bridge across a little river was under construction.  With no other easy route to reach the SNA, we decided maybe it really was time to head home. So we did.  We’ll be going out again to look for more fall flowers and seeds, but in a year when we’ve finally managed to see all of the possible orchids in Minnesota, ending our orchid year with a hat trick of Great Plains ladies’-tresses felt, well, as sweet as the smell of almonds.