We love bogs.  From my first glimpse of the Big Bog up by Waskish, Minnesota, I fell in love with these wild and strange-to-me places—the mosses, the unusual plant inhabitants, the soft-needled tamarack trees, the great silence as though the deep peat soaks up sound.  Since then we’ve visited many bogs and many kinds of bogs, and we love them all.

Bogs are circumpolar, most of them occurring around the globe in the northern half of the earth.  The Minnesota Department of Natural Resources defines a bog as occurring “only on deep saturated peat… isolated from ground water and from water that flows from mineral soil…[which] makes bog water very low in mineral nutrients and very acidic so only very specialized plant species can survive these conditions.” Another way to think of a bog is as a bowl—water doesn’t really flow in or out.  Cold acidic water, harsh growing conditions:  bog plants are tough survivors.

This post is a tribute to some of the best bog visits we’ve had so far.

Lake Bemidji State Park Bog Boardwalk leads to the edge of a small lake and back.  Along the way signs point out some of the features.  With and without the help of signs we’ve seen, at various times, purple pitcher plant, Labrador tea, bog rosemary, stemless lady’s-slipper, grass pink orchid, buckbean, early coral root, three-leaf goldthread, and tiny insect-eating sundew.

At Long Lake bug shirts and raincoats were the fashion statement of the day. The lake is slowly filling in at the edges, a floating bog best seen from the water.  Canoeing around the edge of the lake we found many rose pogonia and grass pink orchids, along with sundew, bog cranberry, cottongrass, common bladderwort, and purple pitcher plant.  Even on a fallen log tiny little communities of plants grew.

Quaking Bog at Theodore Wirth Park in north Minneapolis is an urban remnant of a much larger bog, but even with a freeway nearby the atmosphere feels hushed. Here on various visits we’ve seen leatherleaf (the only place we’ve ever seen it blooming), buckbean, starflower, wild calla, Canada mayflower, and purple pitcher plant.

Minnesota has many more bogs and bog boardwalks—Sax Zim Bog, Hayes Lake State Park boardwalk–including one state park that once had a bog boardwalk until, the park ranger told us, “The bog ate it.” And even though we know that all landscapes change, that bogs at lake edges are slowly filling in, that bogs do eat boardwalks and that the bogs we know are only as old as the last ice age, we say long live bogs, big and small.  We love them all. 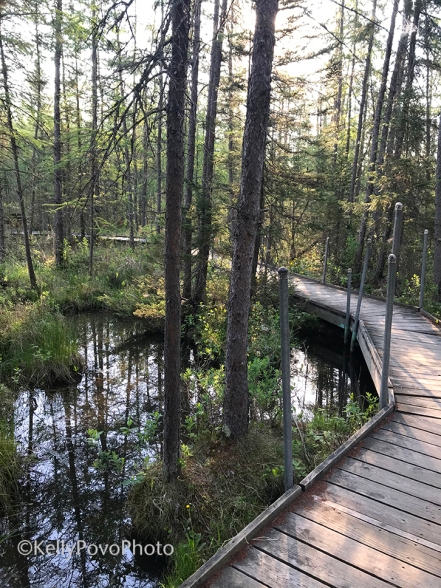 We came to the North Shore to see Hudson Bay eyebright and purple fringed orchid blooming, thanks to a helpful phone call from a master naturalist and fellow wildflower lover who told us where both were blooming.  And he was exactly right:  we drove north, turned along the road he told us, turned again, crossed the railroad tracks, made one more turn, and saw purple fringed orchid gloriously blooming up and down the roadside ditch.  Driving on up to Sugarloaf Cove on Lake Superior, we found the tiny, tiny arctic relict Hudson Bay eyebright blooming in cracks of rocks. The plants and flowers are so minute that we might never have found them without Phil’s help.

Scattered in crevices and seemingly growing right out of the rocks we found other small plants that Kelly photographed and we later identified:  white upland goldenrod, which looks like small daisies, three-tooth cinquefoil, shrubby cinquefoil.

Every fracture or dip in the rock seemed like a tiny world of its own.

On the path down to the cove spotted coral root grew.  Returning in the morning to get one more look at the eyebright, we also found beach pea in glowing blues and purples and magentas, spurred gentian, twin flowers and bunchberry blooming, early coral root, and, with the guidance of a naturalist at the Sugarloaf interpretive center, one-flowered pyrola and large leaved shinleaf.  One-flowered pyrola flowers face demurely downward until they go to seed—one group we saw going to seed had turned upward like a crowd of people staring at the sky.

We stopped so often along the road to photograph evening primrose, more purple fringed orchids, a tall northern bog orchid, smooth oxeye, and fringed loosestrife we thought we might never make it home.

We did, though, already eager for our next exploration and grateful for friends who share their enthusiasm and knowledge for the same native wildflowers we love. 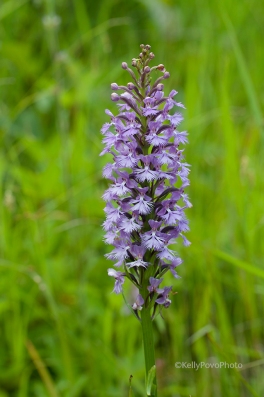 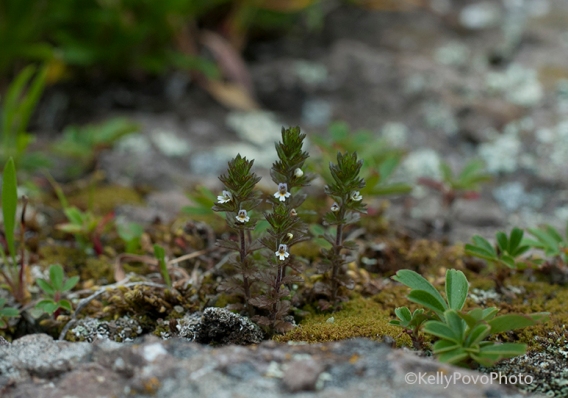 We are driving back to the Twin Cities today and plan a few stops at places to look for flowers.  The first is Seven Sisters Prairie near Ashby.  The hills rise above the rolling landscape, and we climb the path up the first hill as the temperature climbs toward a high of 90 degrees.  Along the hilltops the prairie wind whips the grasses and flowers, a welcome relief from the hot sun, and the landscape—lake, farm, woods—stretches around us 360 degrees. Along the path that winds over the hilltops we find purple prairie clover, white prairie clover, Canadian milk vetch, stiff goldenrod, thimbleweed, harebell, fleabane, side-oats grama, hairy grama whorled milkweed, lead plant, prairie milkweed, ground cherry, prairie turnip, wild rose, wild bergamot, pale spiked lobelia, hairy false goldenaster, yellow sundrops, and green milkweed.  Bumblebees buzz, and dragonflies flit among the flowers like electric blue darning needles.  We are clearly back in the Minnesota prairie.

Then we lose the path in sumac. Is this it, we wonder.  Or this?  Or this? When we finally make our way through sumac waist-high and higher, down hills, under trees, and alongside a marsh through buckthorn to where we left the car we are both drenched in sweat and decide that perhaps we will head on home after all.  The other places we had planned to stop are well within driving distance of the twin cities, and we will come back another day soon.  We also invent a new word (or at least we think we do): shrubwhack.  Harder than bushwhacking, not as difficult as treewhacking.

As we drive through Alexandria, Minnesota, we spot Cherry Street Books, an independent bookstore, and stop for a quick look.  In the window we see our book Searching for Minnesota Wildflowers.  At our first stop on the way north at Mille Lacs State Park we also saw our book in the hands of a naturalist.  It seems auspicious that our trip is bookended by book sightings—we are already talking about doing some sort of book about Churchill and the sub-arctic wildflowers we’ve seen.

Quietly contemplative—so much to let settle in from the incredible experience we’ve just had—we drive on home.

p.s. We don’t recommend shrubwhacking, but we do recommend the Northern Studies Centre in Churchill, Manitoba.  It really is the experience of a lifetime.

August 17, 2021. Audio Postcard, Hunting for Wildflowers that Thrive in the Shade

May 5, 2021, Audio Postcard with MPR, Early Spring Violets in Bloom

April 9, 2021, Audio Postcard with MPR, Too Many Signs of Spring to Count

September 2, 2020, Audio Postcard with MPR, A Spot of Blue on the Prairie

August 14, 2020 Audio Postcard with MPR In Search of a Rare Primrose at Helen Allison Savanna SNA

July 13, 2020 Audio Postcard with MPR On the Hunt for Wildflowers at Long Lake Conservation Center

October 13, 2021
Prairie Edge Chapter of the Wild Ones