After our first wildflower talk of the year at Ridgedale Library, we headed out into a day with temperatures in the fifties to begin looking for this year’s wildflowers. True, it was only March 7, and snow still piled in places, but the sound of running meltwater wove through the air, and how could we resist such gorgeous weather even if we might not see a single flower?

In the last few years we’ve found skunk cabbage, one of Minnesota’s very earliest native wildflowers, growing down by Minnehaha Creek.  Water cascaded over the falls in fantastic ice sculptures as we slipped and skidded alongside the creek until we reached the boardwalk.  And there the first dark snouts of skunk cabbage were already poking through the ground, some still thawing the snow around them with their own created heat, some already free of the snow.  It’s not just us who feel as though spring is almost here–skunk cabbage must feel it, too.

If the skunk cabbage at Minnehaha Falls was already making an appearance, what about the ones at Nine Mile Creek that grow in a runoff gully where even more sunlight reaches the ground? Happy to stay outside on this glorious day, we headed for the creek to find even more skunk cabbage even further along in its blooming.

Delighted with our skunk cabbage finds, we wondered: could pasque flower, another early bloom, possibly be sending up its furry flower buds? We’d seen pasque flowers last year in a small goat prairie in Bloomington, a few minutes drive away on the other side of Nine Mile Creek.  More slipping and sliding to get to the goat prairie where we didn’t find a single pasque flower bud, but we did discover the greening leaves of prairie smoke and cinquefoil.  In a week or so, we’ll be back, and so, we hope, will the pasque flowers.

Who knows what treasures we’ll find this year chasing wildflowers? We are excited to find out! 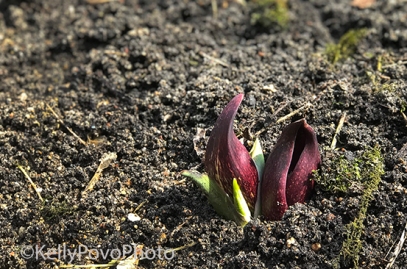 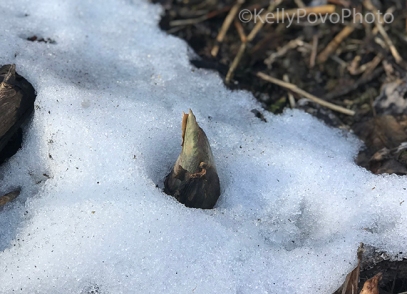 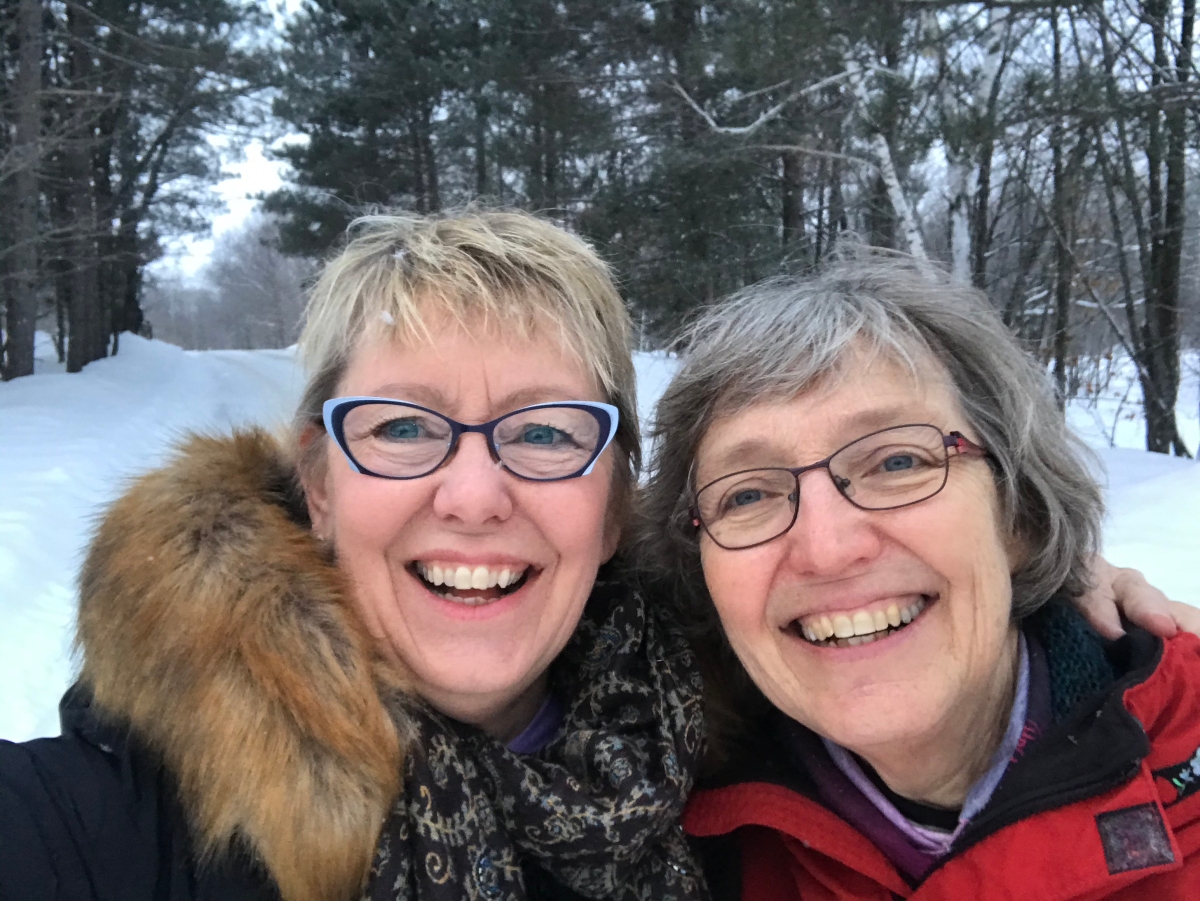 Thursday is field trip day in our master naturalist class at Long Lake Conservation Center, and our whole group carpools to Jay Cooke State Park to learn more about the geology of the Saint Louis River and its watershed.  Not only do we learn about slate and graywacke, the two predominant rocks that make up the park, we also learn their origins and how to remember them, since even the rocks under our feet change over time.  Mud becomes shale becomes slate, and sand becomes sandstone becomes graywacke.  (Shale and slate both have five letters, while sandstone and graywacke both have nine—what’s not to love about memory tricks?) The Saint Louis River itself is partly frozen and runs in and out of ice formations as we cross the swinging bridge, rebuilt since the flood of 2012 destroyed the previous structure.

An added bonus:  among the informational displays at the park lodge we discover pictures of two native flowers we have yet to see, moschatel and wild chive (which grows only at Jay Cooke) and make plans to return during wild flower season to search for them.

After lunch we’re left to explore on our own, and we head a mile down the road to find Hemlock Ravine Scientific and Natural Area (SNA), where a quarter of all the eastern hemlock trees left in Minnesota grow—a grand total of 26 trees at the far western edge of their range.  We walk along the trail at the edge of the SNA surrounded by pine trees, snow, silence, and sunshine.  The shadows of trees roll peacefully over the undulating drifts, and we are both very happy.

Back at Long Lake we gather up the data from our tracking project and discover that we have not managed to capture any images of animals on our trail cameras.  But we’ve seen tracks we identify as fox, coyote, weasel, and (possibly) mink.  We are taking home a new appreciation for those who can read the tracks of animals in the snow, along with an understanding that there’s still so much to learn about our natural world.

At the end of the day our whole class plays a lively pub trivia game (minus the pub) about facts we’ve learned throughout the week. Luckily our team includes Jim, who knows all the answers, and we’re pretty sure that when the results are tallied, our team will be leaving with the grand prize of winter hats with built in lights.  Thanks, Jim.

Today (Friday) we present our completed projects, assess what we’ve learned, say good-bye to all the amazing folks we’ve met, and head out into the world as master naturalists. A week well spent. 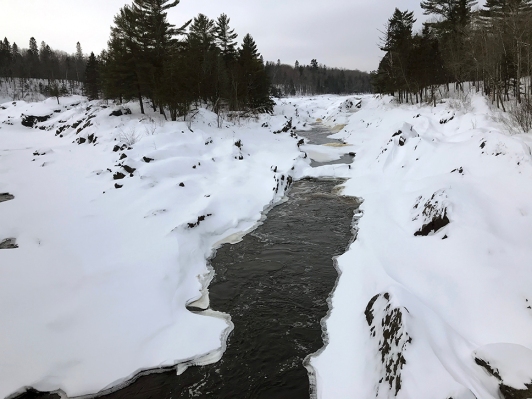 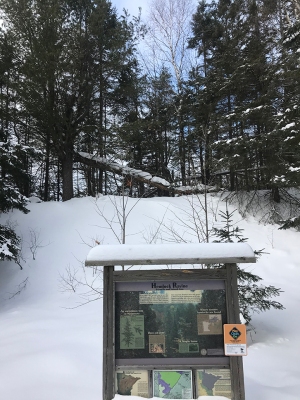 Today begins with snowshoeing to set a trail camera and place bait (really smelly beaver scent) to try to capture images of predators for the DNR.  As we search for a likely site we cross tracks that might be fox or another predator, although our identification is tentative because the tracks are already drifted in with snow.  Under the shelter of a red pine we find a deer bed with deer scat piled nearby.  Clearly there are animals roaming these woods, and we’re hopeful that when we check the camera tomorrow we’ll find both tracks and pictures.

Later in the morning we travel back in time to a voyageur’s winter camp to learn about Minnesota history, drink spruce tea–and realize that if we had to survive in the winter woods, we would not last long on our own.

After lunch we learn from a visiting master naturalist, Chris Tolman, about Minnesota’s predator species from dragonflies to apex predators and meet a great grey owl who had been injured and can’t be released back into the wild.

As the sun breaks through the overcast sky of the last few days we head outside again to snowshoe into the bog. Being bog lovers, we thought we knew a lot about the bog but discover how much more there is to learn, including examples of adaptation (tawny cotton grass holding on to its seeds for dispersal in snow), parasitism (dwarf mistletoe on black spruce trees), and asexual reproduction (Labrador tea spreading by rhizomes). Now that we know how much easier it is to walk in deep snow with snowshoes than without them, we won’t limit our bog visits to just the summertime.

We snowshoe back under a blue sky laced with clouds and lit with golden sun setting through tall red pines. Later still a crescent moon and Venus both shine bright in the night sky at the end of a glorious day.

2020
In person events for July-September 2020 have been canceled this year, however, we are willing to present our program online.